EP – What’s the difference between “The Pensive” and the “Curious Spectator”?

LAURA MULVEY – I think the “Pensive Spectator” and the “Curious Spectator” are very much the same. They just come out of different moments of my thought, when I was thinking about the curious spectator I was still thinking about cinema on the screen, I was thinking about the feminist spectator who would take the images of women apart and reconfigure them as something else. And that in a sense it’s assuming a theoretical engagement of a certain kind of feminist legacy of reading a film, in which the pleasure of the mind’s eye can take over the pleasure of the pure eye itself. Of course I was also thinking of alternative kinds of cinema, the way in which I thought cinema would radically change after the collapse of Hollywood and the rising of different new waves, like the Brazilian new wave or the french new wave, all the different cinemas that were emerging in the 60’s and 70’s quite apart from an avant-garde or feminist avant-garde.

The pensive spectator emerges out of the new technology of spectatorship and the ability to pause, delay, repeat, slow down, return… So for the curious spectator the matter was really about the question of femininity, representations of femininity, the female body, etc. Where as the Pensive spectator includes the question of the temporality of cinema itself, and how we can learn from the cinema to think about time, in a way that is almost, what wee say in English, mind bogling.

EP – But they are both some kinds of appropriation of the film. They possess the film, in a way.

LAURA MULVEY – Yes, I also said that the “Possessive Spectator”, who’s the spectator fascinated by, as Christian Metz would say, what the technology is capable of, but who then was to think “what does this technology mean?” So the pleasure in the cinema and the pleasure in the body, and possessing the body by holding the image in hold or delay, then necessarily collapses into thinking about the meaning, and then back again. So, a theorization and a pleasure, to my mind, are very difficult to distinguish. And I say this partially, of course, because I’m influenced by Psychoanalysis, and from a foreign point of view you can’t necessarily detach thought from desire. You can’t have a “Pensive Spectator” who is free from a question of the desire for the image at the same time, and vice-versa. 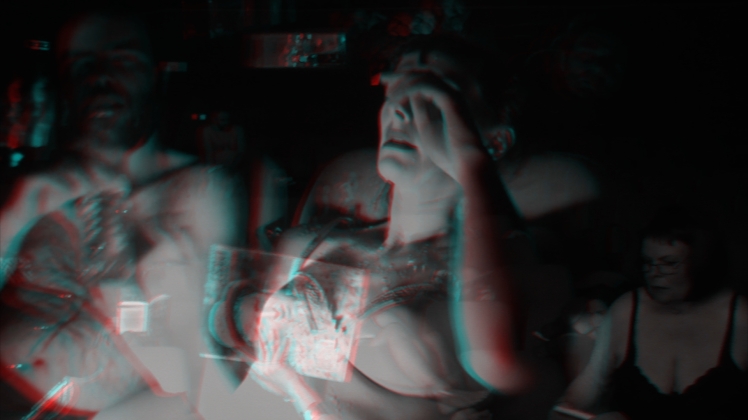 EP – So when you say, in “Visual Pleasures”, that by knowing something you’re wanting to destroy the pleasure of it. Do you still agree that knowing destroys something?

LAURA MULVEY – I don’t think there’s much left to destroy… That’s what I say at the end of Death 24 times a second. I say, in the 1970’s, I was asking to destroy that form of spectatorship, that I was explaining in the original article, and I say “the new technology has, more or less, done this for us” and that ever says on breaking down continuity, finding heterogeneity within the homogeneous, finding moments of thought within flow has actually happen.

EP – What do you think when a fan appropriates of something? Like with the Star Wars Saga – there are lots of movies inspired by Star Wars made by fans which are really accurate, their makers have to study all the images of a film, to make a movie based on it. Do you see any kind of relation to that kind of spectator?

LAURA MULVEY – I haven’t studied the culture of fandom. I mean have been introduced me to remixes, the the idea of remix and I’m thinking about that because I’ve been taking some of my favorite moments and editing them…

EP- I’m not talking about remixing, it’s shooting something fresh but with the same special effects, with some of the original quality. With a fan movie of Star Wars they have like millions of views on the internet.

LAURA MULVEY – A friend of mine in the US did a study of how Star Wars has generated stories, fans writing their stories, which are often eroticized versions of the Star Wars story. Might be something like that, a culture of fandom which has now been able to explode to the moving image, which before existed in the fanzines.

LAURA MULVEY – I think there’s a difference. The difference is: perhaps because I am an intellectual I can’t help theorizing and analyzing, and so although I would say that the kind of cinephilia I participate with isn’t purely intellectual but has other aspects to it of fascination. And fascination that is not only as if were with the image of the Cinema or the star, but also a fascination with repetition itself, so that repetition becomes a fascination.

So to seeing a gesture over and over again, as you might see with my hand for instance (not that my hand is very elegant) but if it was the gesture say of Marlene Dietrich, you couldn’t stop and hold on it, and see a movement of the body. Or even, actually, the presence of a figure in a landscape. So I think that the question of repetition is that almost moved into aesthetics, and it’s part of the way in which people see aesthetics today. Seems very much to be trying to escape from linearity and to find simultaneity and finding different forms of thinking about time, so I think these questions about time, which delaying the cinema necessarily brings up, is also part of today’s mentality, esthetic and intellectual…poetic.

EP- There is a constant rewinding of the story to the beginning point of the last scene. This kind of fragmentation and manipulation of time is a constant delay…

LAURA MULVEY – It happens more and more as the moving image moves into the gallery, and onto different screens and multiple screens, you have different patterns and shapes of temporality.

EP – Can you give me an example of some kind of radical Cinema that gives a new image of men and women nowadays?

LAURA MULVEY – It’s a difficult question, because some of the movies that I’ve loved that have had a particular impact on me recently, of being somewhat apart from conventional gender relations. So if I think of something like Apichatpong’s Tropical Malady, which is one of my favorite movies of the last 10 years or so, the question of gender is turned upside down, although it’s a relationship between two young men, it’s a relationship. I found it hard to describe, I find the film very fascinating.

Also I’ve been influenced in my thinking by the earlier films of Kiarostami and I was also interested in the Iranian Cinema because the question of gender became so taboo, and to think about how Cinema could reinvent himself and gradually bring back the question of relations between men and women in a very careful and elongated way. So a film likeThrough the Olive Trees, for instance, which is really about the relationship between a young man and a young woman but also brings in questions of class very centrally as well. Seems to me to be, perhaps Godard would say the return to year zero, and a kind of re-emergence of something.

But to tell the honest truth, it always seemed to me, many many many years ago in the early 1970’s when I first got interested in women film, that cinema would radicalize itself if there were as many women making movies as there were men. And if you asked me and my friends and fellows of women liberation, how many women would be making films at the turn of the century, we would have said 50% or more. In 1970 we would’ve expected it, that it would be as many women making movies as men. And that could have actually change the way in which either gender was focused on so much or the way the gender was represented, but it hasn’t happened.

EP: Henry Jenkins told me that “a cinephile is a fan with a pedigree.”…

LAURA MUVEY (smiling) – Well, I wouldn’t agree with that totally but nowadays I suppose that’s true. In early the days I would say that a cinephile it’s a film fan with an obsession… well…

EP – Nouvelle vague is a fan movement that wanted to make an “homage” to some Hollywood filmmakers, but at the same time they did completely different films. They didn’t copy and paste.

LAURA MULVEY – I always thought there was something in cinephilia which is rather like the passion for collecting, certain in the early days not now. But in the early days when no one…if you didn’t know the name of the director of a film, the newspapers in the listings didn’t tell you, so you had to have that connoisseurship and then you had your lists and books where you’d mark off the films you’ve seen director by director and accumulate and collect. So it was rather like a passion for collecting combined with a kind of film buff connoisseurship…